Riesling from Niagara Peninsula VQA ➕saffron and truffle pilaf 🟰 A meal to remember🥂🍚
This photo reminded me the cartoon about wine pairing in the stone age.
Here is to fusion cuisine🥂 I love bringing together ingredients from Nova Scotia with Turkish recipes👌🏻
Layers and layers of aromas paired with bright colors, flowers and blue skies🍷🌸🌤
Memory Monday🍷🍇
How to make a shiny pink pasta? 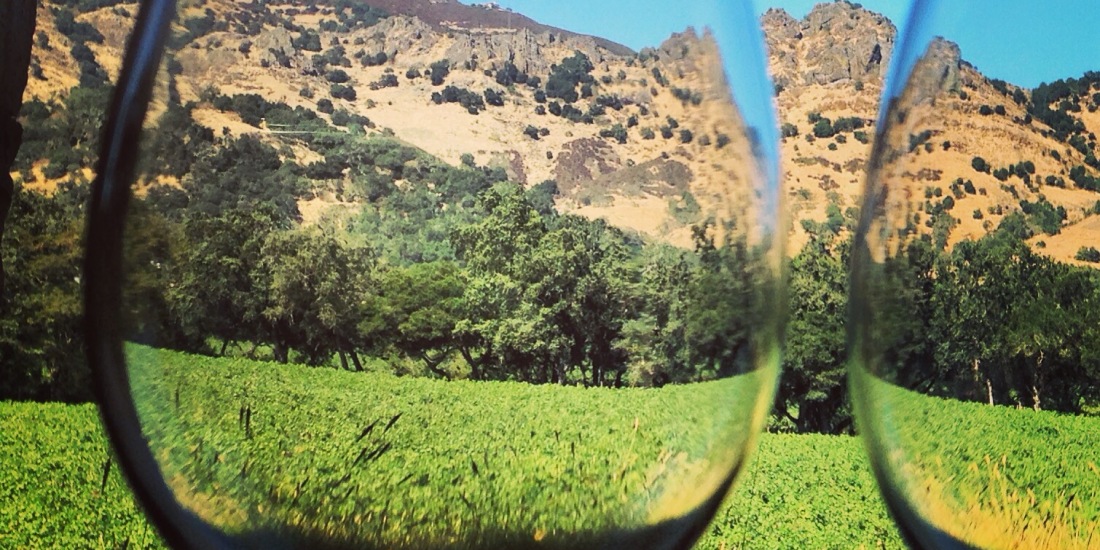 Arriving at 5766 Silverado trail, the glorious entrance doors open to Stag’s Leap Wine Cellars. As you enter, the busy Silverado Trail is left away, and you find yourself surrounded by hills carrying vineyards on their lap.

Stag’s Leap Wine Cellars has been in Napa Valley since 1970 and produces mostly Cabernet Sauvignon by simply respecting their historical vineyards. The winery won its reputation by winning the Judgment of Paris in 1976. It’s showcased at the entrance of the winery, where you can see what Stag’s Leap Wine Cellars are proud of the most: their history, their soil and the 1973 S.L.V Cabernet Sauvignon wine that won the 1976 Judgement of Paris.

The tasting room is full of light and purely shows the breathtaking view of the vineyards. It’s designed in 2014 by Barcelona based architect Javier Barba.

Chardonnay Arcadia 2014: The production style of this Chardonnay is similar to Chablis. It’s fermented in barrels and aged sur lies in French oak barrels for 8 months. The oak aromas are well integrated, first the flower and fruit aromas show themselves and later on, the oaky aromas follow them.

Artemis 2013:  A Cabernet Sauvignon (95%), slightly blended with some Merlot (4%) and Malbec (1%). It’s from the winery’s Napa Valley Collection, where it shows consistency every year, while in other wines they are embracing the differences brought by characteristics of each vintage.

Fay 2013 and S.L.V. 2013:  Both of them are 100% Cabernet Sauvignon. The grapes for Fay come from the Fay vineyards, which was the first block bought of the property. This vineyard is dominated by alluvial soil. It’s capturing with its fruity aromas and soft texture on the palate. Following wine, S.L.V. 2013, acronym of Stag’s Leap Vineyards, is dominated by volcanic soil. The production method of these wines is almost the same; this makes it possible to express the characteristics of the soil. S.L.V. has a completely different style with black fruit and spicy aromas and stronger body. Later on, we tasted S.L.V. 2005 to understand how well it ages.

CASK 23 2013: The signature wine of the property CASK 23, which is a blend of grapes coming from FAY and S.L.V. vineyards. In vintage 2013, the percentage was 45 and 55 percent respectively. According to Ed, if FAY wine is Taylor Swift with its freshness and fruit aromas, while S.L.V wine would be Angelina Jolie with its velvety texture on the palate. He then adds, CASK 23 would characterize his wife, who has beauty and has his endless love. Ed’s wine descriptions were fun, he has a style to characterize the wines in a way that everybody can understand. Wine becomes more appreciated as one understands its story, and Ed helps people to do it.

Highlights of visit to Stag’s Leap Wine Cellars are the perfect hosting that makes you feel comfortable during the visit, good wine with a history behind where they have already left behind almost 50 years full of winemaking, and the respect to the soil by making two different Cabernet Sauvignon the same geographical area grown in different types of the soil.