Since many people, including the worldwide-known sommelier Josep Roca, had enjoyed the pairing that I’ve made with Manzanilla and Nova Scotia lobster, I’ve decided to create another pairing to unite Jerez region with Nova Scotia.

I believe that the key point of creating a dish is to use the local ingredients and try to combine them without losing their unique tastes. So, starting from the local ingredient shopping, I went to the farmers’ market to choose some of the flavors of Nova Scotia that I want to highlight on my plate. I ended up with all these vegetables in my basket:

From vegetables, I’ve bought an acorn squash and delicata squash, some baby carrots, purple potatoes and rainbow chards. The lady who sells the purple potatoes told me that her mom was cooking a potato omelette with them, which she recommends us to try. Next time, I’ll do that.  I’ve also bought some apples and blueberries. I am not going to use them in this dish but they are absolutely delicious and very abundant in Nova Scotia. In the bowl, I have some 100% pure maple syrup from Nova Scotia, which is absolutely delicious and unique. The only non-local ingredient that I have in the photo is the walnut, I had it at home and it will also accompany this dish. So, let’s start to prepare.

One of my favorite way to pair any wine with a dish is actually using a little bit of that wine in the food while you are cooking. This will give the similar taste and aromas to the food to make a complementary pairing with your wine. That is why I created Sherry-Squash Purée with Walnuts.

To avoid cutting the raw acorn squash, which I found very difficult, I’ve made some small cuts with knife and baked it for 45 minutes in the conventional oven at 350 F. After the baking, it’s so much easier to cut and mash it.

After I’ve mashed the squash, I’ve put it in a pan and added all the other ingredients, cooked it until the alcohol of the wine evaporates. If you want a softer texture, you can add some milk or water, as you wish.

I’ve created this sauce earlier to accompany the lobster plate and I’ve liked it so much that I will use it again in this plate. This sauce plays an important role, in giving the extra nuttiness and also combining with all the elements of the dish.

After the ingredients are ready, the preparation is just easy, put everything in a small blender and mix them. When the texture is like crunchy peanut butter, it’s good to go!

Here, I’ve just followed my heart and the colors of the vegetables. Rainbow chard, purple potatoes and orange baby carrots seem to me like a good choice.

I’ve cut small sticks from the stems of the chard, cubes of purple potatoes and cleaned the baby carrots. Just for a minute, I’ve cooked them in boiling water, to soften them up a little bit. Following, I’ve sautéed them in a pan with olive oil until they are crispy outside. 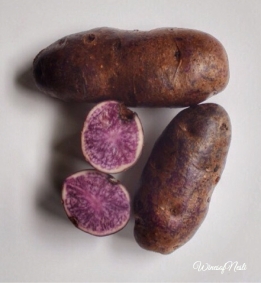 Maple syrup is definitely one of the most important ingredients of Canada, and so is Atlantic salmon. I’ve tried this dish once in a restaurant in Lunenburg. It was delicious; sweet and crunchy outside and soft and juicy inside.

I’ve prepared the sauce by mixing maple syrup and soy sauce and marinate the Atlantic salmon in it during an hour in the fridge. It’s a good idea to turn once after the half time. Once it’s coated well with the sauce, I’ve put it in a hot pan, cooked it very quick; 7 minutes one side and 5 minutes the other side. Another option would be cooking in the oven but I preferred the pan to have the crunchiness that I desired.

When all the elements of the dish were ready, I’ve simply used my imagination for a sublime decoration of the plate, which I found very important, because the first sense that will judge the food will be our sight.

The wine that I’ve chosen to pair this meal is Tio Pepe Fino from Gonzales Byass. I’ve made a tasting before all the pairing preparations start, so I am sharing those notes with you:

If you want to be 100% local, which is also a good approach of pairing since the local food and wine are the best friends; I can suggest you a bottle of Tidal Bay from Nova Scotia. There are 12 wineries in Nova Scotia that produced Tidal Bay this year; they are all crisp and rich in aromas. For this particular dish, they would pair perfectly. I can suggest the Tidal Bay from Lightfoot and Wolfville, which I consume often to pair all types of seafood dishes, including sushi.

With this pairing of Fino and Atlantic salmon, I’ve bring together two different parts of the world in one table. Although I cannot neglect the power of local food and wine pairings, I really enjoy this kind of gatherings, wine and food from extreme points of the world and melt them down in my stomach.  I hope you enjoyed it and maybe you decide to try it out, with your own personal touch. If you do so, please let me know how it goes.