As most of us followed, the social media accounts were shaken by the “ten year challenge”: We shared our photos from ten years ago, next to the current ones, and showed how things changed after all these years. To me, this was a real challenge, but very rewarding at the same time, since it gave me a chance to have an overview of the last decade. While I was browsing my old photos, I’ve realized, I’ve made my first grape harvest and winemaking experience exactly ten years ago, in 2009.

In the autumn of 2009, I was a young and curious student who wanted to learn winemaking. After researching the wineries in Turkey, I’ve decided that Kavaklidere Winery was the best place for me to learn it. It was then and is now one of the leading wineries of Turkey, which was founded back in 1929. With three winemaking facilities in different regions of Turkey, Kavaklidere Winery sets the bar high both in quality and quantity. One of the facilities is situated in Cappadocia, to be more precise in Côtes d’Avanos vineyards.

Cappadocia is an amazing area of Turkey which is well known with its special landscape and fairy chimneys that make this region a very famous tourist destination. Moreover, that beautiful landscape also helps Cappadocia region to have a unique terroir for wine growing.

Using the ten year challenge as an opportunity, I would like to take you to Cappadocia to show how Kavaklidere Winery and winemaking in the region has changed in the last decade. Before taking you to this time travel, I invite you to take a look into terroir of Cappadocia, and to the local grape varieties grown in the region. 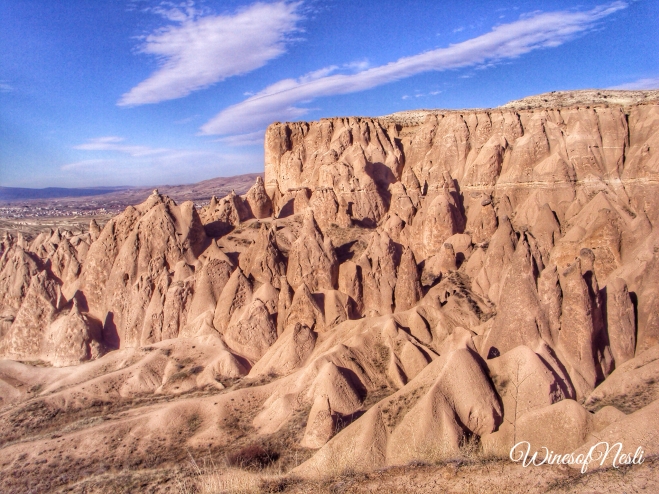 Cappadocia is situated in the Central Anatolia. It has continental climate, with hot dry summers and cold snowy winters. Although the region is broadly semi-arid, there are different microclimates created by effect of the Kizilirmak River, which is the longest river, which flows entirely through Turkey. When it comes to soil, the important aspect is the influence by the ancient volcanoes, and their lava streams, ashes and tuff stones.

This soil, apart from giving a unique environment for vineyard, also creates underground caves which have ideal conditions for wine aging thanks to constant temperature and humidity. It’s possible to visit some of these underground cities with local tour guides, where they would explain all the history and characteristics of this land. On the other hand, some of the caves are still used for storing fruits and vegetables. There are also modern wine cellars where you can taste and buy wine.

The wineries are well spread over the region of Cappadocia, oldest ones can be listed as Turasan, Kocabag and Kavaklidere. Both local and international grape varieties are grown and used for winemaking.

The local varieties that are grown the best in this region are the white grapes of Emir and Narince.

Emir, pronounced as “eh-meer” and it means “lord/ruler” in Turkish. (Most of the local Turkish varieties have names with a meaning.) It’s very well adapted to the climate and soil type of Cappadocia, that’s why it’s grown only in this region. The wines made from Emir have generally light yellow colour and light-medium bodied with relatively high acidity and delicate aromas of apple, pear, pineapple, blood orange, kiwi and melon.

Narince, pronounced as “nah-rin-djeh” and it means “delicately”. It is mainly produced in Tokat, and followed by Cappadocia. The wines made from Narince have straw-yellow colored wines with floral notes like acacia, stone fruits and citrus aromas, with medium acidity and generally have a good potential of aging.

To give a better idea about them, it’s possible to point out their similarities to international varieties: Emir to Albariño and Pinot Grigio, while Narince to Chardonnay. Categorizing them this way might not be the best idea, but it can still give you some clue of what to expect if you haven’t tasted them before.

10 years ago in Côtes d’Avanos

2009 was the year when I had the chance to see how every single detail counted for producing a quality wine in Kavaklidere Winery. I was working in the grape reception, meaning where the grapes were welcomed to the winery. Being a part of the winemaking team, working as a unique body, efficiently and with passion for something that I appreciate immensely was priceless.

Looking back tho the harvest 2009, the most inspiring part for me was the vineyard workers who were hand harvesting the grapes. As far as I’ve observed there, most of the workers who contribute to harvest and sorting the grapes were women. They were all very careful with the crop, cutting the stems without damaging the clusters and they were very fast. The same situation was in the sorting table, the women were selecting the grapes with diligence, and discarding those which were not in the desired quality. Most of them didn’t know anything about winemaking or wine, but they knew the importance of working for their soil and for their own territory. I believe, this, the commitment of these people to their soil, is one thing that wouldn’t change, no matter how many years would pass.

I imagine a lot would be changed in Cappadocia since last time I’ve been there. To be able to get some news from Côtes d’Avanos vineyards, I’ve contacted Sanem Karadeniz, Wine Production Manager of Kavaklidere Winery. She has been working in this winery for many years and has extensive experience in the terroir of Cappadocia.  She has fingerprints in every improvement made in the vineyards and the winery.

Sanem Karadeniz explained me that in the last years, they have been working intensively in the vineyards to increase the acreage of Narince grapes, to get the best quality of them, and also adapting their viticulture management, to avoid the possible effects of global warming. She explained the path of Narince grapes as follows:

“Narince has been planted in Cappadocia in 1995 and since then, we have been watching its growth and positive development in the vineyards with joy. With affirmative adaptation of this grape variety in Côtes d’Avanos, we are increasing the area of the plantation of this grape: In 1995 we have started with 25 decares and today we have reached to 150 decares.”

It was so exciting to hear all the positive efforts of Kavaklidere Winery in Côtes d’Avanos vineyards; choosing the most suitable training system and row direction for plantations of Narince, making trials with the rootstocks to choose the most suited one, and always working towards best quality rather than aiming for high yields. Moreover, since 2010, organic viticulture practices are applied in these vineyards, and they are getting closer to accomplish biodynamic practices.

From wine point of view, it’s not a surprise to see the positive results of these viticulture efforts in the cellar. The high quality grapes are processed delicately in the cellar until becoming the highest quality wine of the winery. Of course, there are a lot of details that come together to secure this quality. Since Narince is a variety with medium acidity and already with rich oily texture, this makes the barrel aging difficult, says Sanem Karadeniz. That is why, in the last years, they have been working with bigger barrels to balance the characteristics coming from oak, and also to have a better integration of oak aromas with varietal aromas.

From a decade ago, until today, these were some of the changes happened in Côtes d’Avanos. What actually haven’t changed in the region is the local people who work with passion, the women protecting their land and continue the viticulture practices.

My feeling is that, as long as there are producers as Kavaklidere Winery who adopts the most suited viticulture practices, winemakers as Sanem Karadeniz who work for the best quality and local people who loves their land, wines of Cappadocia will continue to change, evolve, adapt to new era and be present in our glasses at their best.

I am glad to have the opportunity to look back and learn about the changes in Kavaklidere Winery and in Cappadocia. I have shared with you some insights of the winemaking scene in the region, and hopefully, we can meet again in 2029 for looking back to the last twenty years.

Special thanks to Sanem Karadeniz for sharing all these information.

4 thoughts on “10 YEAR CHALLENGE: BACK TO VINEYARDS OF CAPPADOCIA”

Wines of Nesli on IG