GONE TO ARAGON: FROM VINES TO WINES

I went to Aragon last June. I have learned so many things about this region, visited the vineyards and the wineries, and tasted local wines and food. I’ve collected so many information and memories to share with you, from vines to wines. So, let’s start…

Starting from zero, Aragon is a region situated in northeast of Spain, and it’s surrounded by other important viticulture regions of the country; Rioja, Ribera del Duero and Priorat. There are 4 denomination of origens (DOs) under Aragon region, these are Somontano, Campo de Borja, Cariñena and Calatayud. A little bit more than 80% of all the vineyards in the region are under these 4 DOs.

It’s also interesting to learn that, despite low rainfall, three quarter of the vineyards of Aragon are producing grapes with dry farming. Correct selection of trellis system (gobelet) and canopy management helps grapes to give the best results with the water they receive naturally.

Ebro River is passing from the region, flows through Zaragoza. As I’ve traveled with train, Zaragoza was the city that I’ve arrived. (For now, I will only say that it’s an amazing city and later I will tell you all about it.)

Coming back to wine, Cariñena, Campo de Borja and Calatayud exports 70% of their wine, principally to Germany, UK and USA, while Somontano sell most of their wine in the internal market.

Somontano has a long viticulture history.

It dates back to couple of centuries before Jesus, according to some documents from 500 BC, it was already planted vineyards in Ebro Valley. One of the factors effected the development of viticulture and wine commerce was the settlement of Italians to the region; they brought the advanced techniques of those times, also created commercial wine companies.

After the phylloxera attack, in 19th century, a very important step for the wine sector of Somontano happened: Family Lalanne arrived to Somontano from Bordeaux and they’ve planted varieties such as Chardonnay, Merlot and Cabernet Sauvignon, since than these varieties are part of wine sector in Somontano.

As we look at today, there are 15 varieties planted in the region for winemaking, and more than 70% of the production is red wine. Most planted red grapes are Cabernet Sauvignon, Merlot and Tempranillo; and the whites Chardonnay, Gewurztraminer and Macabeo. 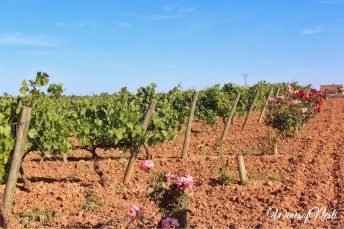 Somontano visit had started with the vineyards of Bodega Enate, the plot that we have visited was a Merlot plantation in Salas Bajas, just in front of the winery itself. It was a sunny and hot day in June, and the vines were with inflorescence (flower cluster) and already started the fruit set, means producing the tiny little berries.

In this photo, you can see an inflorescence with individual grape flowers. Each flower will be giving a berry, while inflorescence will give a whole cluster. (Isn’t it magical?) Grape flowers of almost all Vitis Vinifera varieties are hermaphrodite, meaning they have both male and female reproductive organs in each flower. This luckily makes the fruit set easier, however rain and/or wind can be detrimental in this stage causing a decrease in the fruit set, meaning having less number of berries. At that moment of the visit, these inflorescence look quite promising under the Aragon sun.

After the vineyard tour we went to the winery and made a tasting of their two wines; Chardonnay 234 from vintage 2017 and Reserva Cabernet Sauvignon from 2012. If you see these wines before, you would probably remember them from their artistic labels as well, since Enate produces their wines with motto of “Where art & wine become one”. 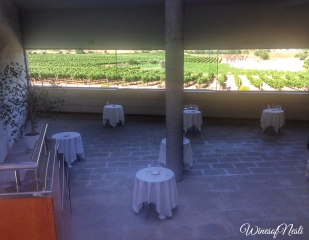 Following, we headed to some plots of Viñas del Vero, in Barbastro.

In the following photos, you can see that the fruit set already happened and the clusters are shaping up. After this stage, berries will start to grow, increase their size and start veraison.

After a long day visiting the vineyards under the summer sun, we’ve arrived to the winery Bodega Laus for dinner. When we’ve arrived, they welcomed us with some appetizers and wines. It was one of those moments of relaxing, watching the sunset behind the vineyards and olive trees. Once we got the sun set, we have entered to winery to dinner. The entrance was cone of goat cheese with tomato confit, paired with Gewurtztraminer of Sommos, 2017. Then we had a cold soup of cream of pink tomato from Barbastro and cherry soup paired with a glass of Garnacha Blanca (Mascun, Bodegas Osca, 2017) Main dish was a timbale of glazed suckling pig (called cochinillo in Castilian) and stuffed potatoes with soya and lime sauce paired with Laus Reserva 2012. Finally, the dessert was a delicious chocolate and raspberry mousse with crunchy nut and red velvet cake. To be honest, it was more than I’d eat on a summer dinner, but it was very hard to refuse any plate or wine! 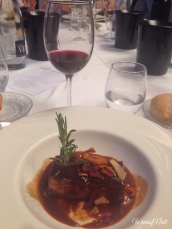 The second DO that I’ve visited was Campo de Borja, also known as “The Empire of Garnacha”. I understood better why they call it that way after the visit.

Campo de Borja is situated in the northeast of Zaragoza.

It is assumed that the ancient Romans introduced and developed grape-growing in this region, but the first written reference is a document in the archives of the Cistercian Monastery of Veruela which refers to donations of vineyards in the year 1203. 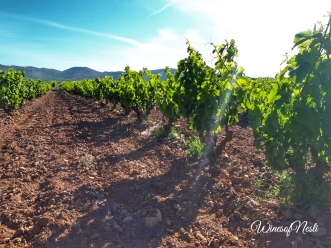 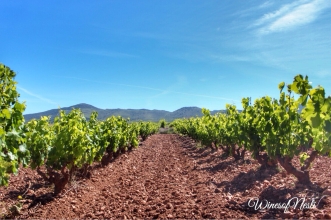 More than 50 % of the total wine production is Garnacha, and the other authorized red varieties are Tempranillo, Carineña, Cabernet Sauvignon, Merlot, Syrah and Garnacha tintorera. Different styles of red wines are produced in the region, some are single varietal from Garnacha, while it’s also possible to find some blends, there are young wines as well as aged wines which are classifies as Crianza, Reserva and Gran Reserva, as in some other DO’s of Spain. Moreover, some rosé wine is also produced from Garnacha grapes. 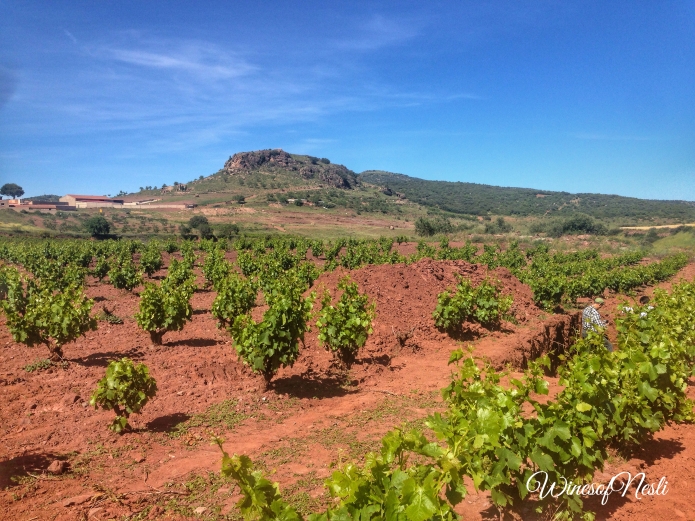 In this region, as well as still, dry wines, they also produce “mistela” from Garnacha grapes. To make mistela, they use only the must of the grapes, and they add alcohol which is obtained from distillation of wine. This way, mistela smells and tastes like a grape juice and since there is no fermentation, you can actually taste the varietal aromas of the grape itself. 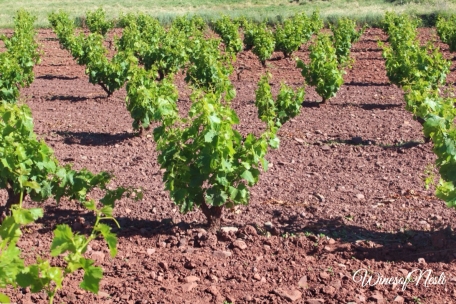 In the following two photos there are 2 vines in different stages of growth, which is possible to be found even in the same plot. Here, the vine on the first photo has a flower cluster, almost bloomed to become an inflorescence, while the vine on the second photo is in a more advanced stage; already made the fruit set.

For those who are into wine, there are a lot of things to see in Campo de Borja and the first one would be the wine museum, where it’s possible to see historical and current wine production techniques utilized in the region. The museum is situated in inside of the Veruela Abbey (Real Monasterio de Santa Maria de Veruela), surrounded by high ancient walls.

In the garden of the monastery, they kept the centenary vines of Garnacha variety. Here, it’s possible to see a demonstration of how abbots were taking care of the old vines in the region. If I haven’t seen this that way, I couldn’t imagine how it’s possible, but the abbots were actually using besoms that they wet with water from their bucket to water the vines. It’s obvious that they were taking care of the plants so well.

We’ve continued our visit by hearing all about the history of the monastery from a guide,  and we’ve entered inside of the monastery: It has a very tranquil atmosphere, it also made feel like I was travelling back in 12th century, when the monastery was first build. When I see the abbots walking in the garden, one moment I innocently thought they were real abbots. But then, our guide told us that the abbots they were volunteers who make these demonstrations and sing as a chore in the church as in the ancient times. They really made us feel the spirit of this historical place.

The moment when I was thinking that it couldn’t get any better than this, the dinner time has arrived. We had dinner a saloon of monastery with high ceiling under historical arcs. The food and the atmosphere complemented each other harmoniously. 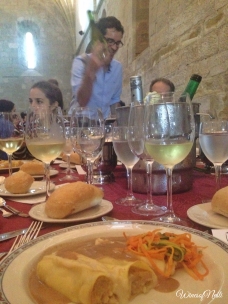 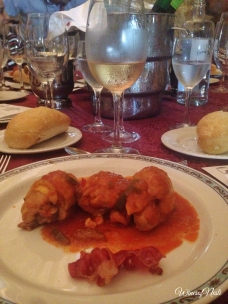 With this dinner, I’ve shared the first two days of the visits, to Somontano and Campo de Borja.

Stay tuned for the last two days in Aragon: Cariñena and Calatayud.

A year in Spain, Wine