Looking at a nice bottle of wine that I’ve brought last year from Spain… I’ve chosen this bottle, from thousands of options in the wine store, and brought back to Nova Scotia. To be honest, the selection was not very difficult, since I was searching for an Albariño wine from Rías Baixas, and this wine had a special character to it: La Comtesse from Pazo Barrantes winery. It’s made from grapes of old vines planted in 1965 and it was aged in French oak for 6 months before released to the market. Only 7119 bottles were produced from this wine, and I’ve bought the number 2881.

I came back to Nova Scotia happily with this special bottle of wine, in July 2018, and since then I had been waiting for the “right moment” to open it. You might know how difficult it is to find that right moment, so the wine kept on waiting in my cellar.

One cold winter day in 2019, I was walking around the liquor store and suddenly I’ve seen it! The exact same wine that I have I’ve brought all the way from Spain arrived to Nova Scotia liquor store as a new arrival! This was quite shocking for me, since I was making a special effort to bring something that was not possible to be found in the liquor store.

Just a small parenthesis, for my readers outside of Canada: The alcohol sales in most of the provinces of Canada are under government monopoly. Specifically talking about Nova Scotia, only the liquor commission of the province and a couple of stores with liquor licences can sell alcohol. As you can imagine, this really restricts the variety of wines possible to be found. Now, you can understand better why I am making such a big deal for a bottle of different wine!

Anyway, my only consolation was, if I’d really like this wine (which was the case in the end), I’d be able to buy it again here in Nova Scotia, without having to go back to Spain to buy it! Such a relief…

The right time of this bottle finally came on a sunny spring day! The calendar was showing the day for this aged Albariño and the pairing idea followed the wine. A dish where Italian cuisine would meet Nova Scotian products: Ravioli filled with lobster and ricotta, served with lemon butter sauce.

Making pasta from scratch is not the easiest thing to do, but once you make it, you understand how it’s worth all the time and effort! My recipe is from an Italian website, which I trust in its recipes and also has videos that show each step of the process. Basic pasta recipe with eggs has 2 ingredients: 400 grams of the 00 pasta flour and 4 eggs!

I use this recipe for all the types of the pasta that I’ve did so far; spaghetti, pappardelle, farfalle… and this time for ravioli!

The filling of my raviolis had Nova Scotia lobster! For the filling, I used 400 grams of cooked lobster meat (previously frozen), 250 grams of ricotta and 2 medium sized shallots. I’ve simply seasoned it with some salt and black pepper. I sauteed the shallots to have some more flavor, and mixed all the ingredients to have a nice and creamy filling.

The difficult part of making the ravioli is to pay attention to not leaving any air in between the dough, while you are closing the layers up – it’s not very easy but some patience and experience will help it out! Another important note is not to make this while you’re hungry because as the patience decreases with hunger, so the air in the raviolis increases – I know this from experience! 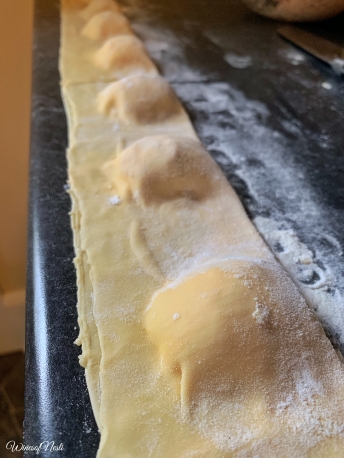 Once the raviolis are ready, I cooked them in boiled water – once they are ready they start to float in the water. Meanwhile, I prepared the sauce. It’s a very simple sauce with some butter, white wine and cream, seasoned with lemon zest. Here, the hint is to use organic lemons, if you happen to use normal lemons (like I did!), you may end up with a very bitter flavor!

This albariño was everything that I have imagined from an aged white wine from old vines – it had a brilliant gold color, with a very complex nose; lemons, apricots, jasmine, honeysuckle and some lactic notes… In the palate, it was dry with a balanced acidity and alcohol, and it had a creamy texture with a long finish.

Ricotta and lobster filled raviolis with lemon butter sauce made an outstanding pairing to this wine. The unctuosity of the wine combined very well with the creaminess of the ravioli filling and butter. 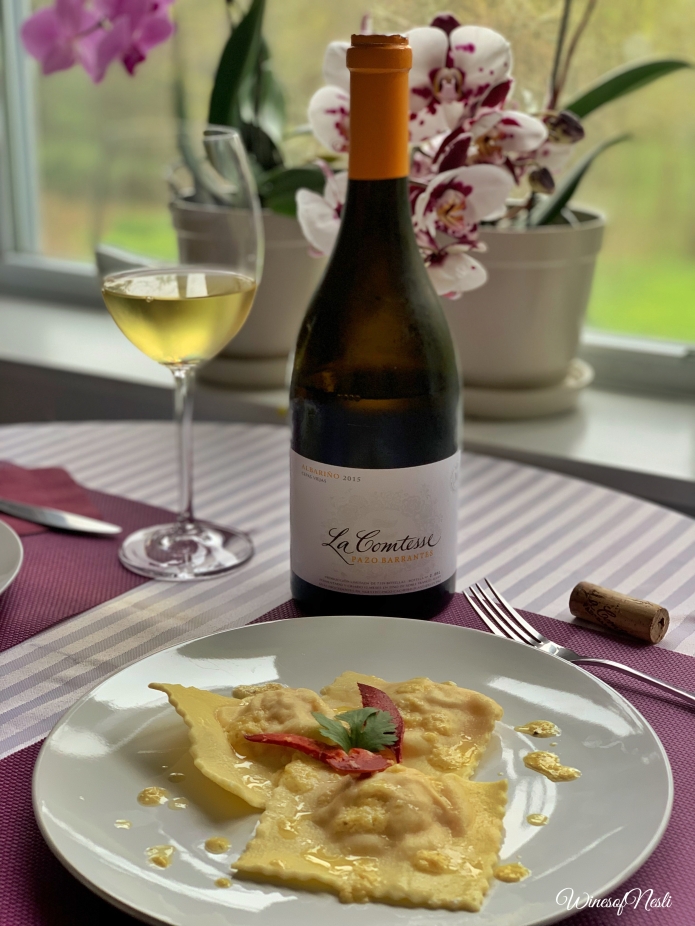 It was an enjoyable international table, wine from Spain, recipe from Italy and ingredients from Atlantic Canada! It’s difficult to not to love bringing cultures together on a single meal!

DON’T POUR IT DOWN THE SINK! HOW TO KEEP AND USE LEFT-OVER WINE

“The cookbook says to add some leftover wine, but what […]
DON’T POUR IT DOWN THE SINK! HOW TO KEEP AND USE LEFT-OVER WINE