My friends are asking me why I love so much Montreal…

My auto-answer is “because it’s international and multi-cultural as I am!” I love the city, I love the people, I love the culture it has and I love everything that it comes with it…

It was a snowy and stormy November day in Montreal. I was out from a wine tasting that lasted more than 4 hours, and the last thing I wanted do was to take the metro. So, I called an Uber. After couple of minutes I was in an Uber going back to my hotel room. Of course, the driver and I started to chat – to be honest that’s my favorite part of Uber driving; I got to meet local people, all around the world. This time, the driver was from Sparta, Greece!

He being from Greece, and myself being from Turkey, the conversation topic obviously ended up being food! He mentioned his family running a buffet serving Greek food. After hearing that, I’ve asked him where I can find some good Greek food in the city. He asked me: “Seafood or meat?” I answered, seafood. Then he said that I should be going to Milos: “Even Madonna goes to Milos when she comes to Montreal, and there you can eat the best seafood!”

Taking an advice of a local for a Greek restaurant is a good idea, but I still made some research before the reservation. After reading the latest restaurants reviews of this restaurant in New York and Montreal with the à la carte menu, I was convinced that choosing the prix fixe lunch menu was a better idea. All things considered, I found myself making a reservation for me and my partner at Milos for the following weekend – for lunch. For those of you who likes to eat the dinner late, there is also a prix fixe late dinner menu is also available.

On our way to Estiatorio Milos Montreal.

The weekend and our lunch reservation time has arrived. As we entered to the restaurant, it felt like arriving in Santorini, even though I have never been there. The decoration with amphoras, white drapes and paintings in the walls from sceneries from Greece, it looked absolutely Mediterranean. But best decoration item was the tower of tomatoes, which I found it to be an exceptional idea.

Our first starter was the Greek meze plate with tzatziki, taramosalata and htipiti served with some toasted pita and raw veggies. Tzatziki is made with strained yogurt, garlic and cucumber, taramosalata with mullet roe and htipiti with roasted red peppers and feta cheese. All mezes had very good texture; creamy and tasty. The second starter was fried calamari, which was crispy and delicious. As an extra to the menu, we also ordered grilled octopus. As served in Greece, it was served on a meze of yellow split pea fava. All these flavours were very similar to those I had this summer in Greece, so we immensely enjoyed all. As wine pairing, of course we continued the Greek concept, and had 2 different Assyrtikos. 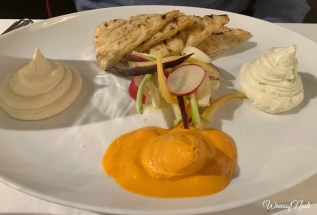 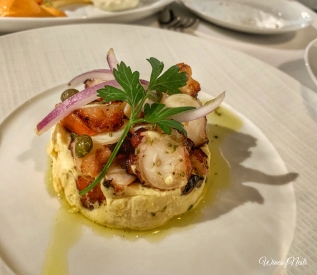 Assyrtiko comes (most likely) from the island Santorini, but it is also produced in the other wine growing regions of Greece, and shows very interesting results. First Assyrtiko we had was called Areti from Biblia Chora winery, which is in Protected Geographical Indication (PGI) of Pangeon in Northern Greece. It was from vintage 2017. The second Assyrtiko was from the winery called Parparoussis. This time PGI Achaia, which is situated in Peloponnese region, in southern Greece. It was from vintage 2016. Both made a great pairing with the starters, and it was very nice to see the differences between these Assyrtikos.

For the main dish, we split in both ways – meat and seafood. We ordered some lamb chops with side dish of oven roasted Greek style potatoes and broccoli and paired that with a glass of Agiorgitiko 2010 from the same winery Ktima Biblia Chora. This aged Agiorgitiko made a great pairing of well-cooked and juicy lamb chops. We also ordered a plate of grilled Mediterranean sea bream with steamed crown broccoli paired with a white blend of local varieties Vidiano and Plyto, produced in a winery called Rhous winery in Crete island in vintage 2017. Both of these local Crete island varieties were new to me: The old and familiar taste of sea bream accompanied perfectly this unfamiliar wine to me. 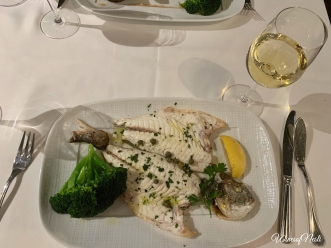 All the plates were very delicious, especially the fish to me was the best part of the meal. I still cannot believe that fish traveled all the way down from Greece, passed the Atlantic Ocean to take its place on my plate. I have no way to appreciate enough the world that we live which makes it possible to enjoy all the flavors we miss, even we are very far from them. 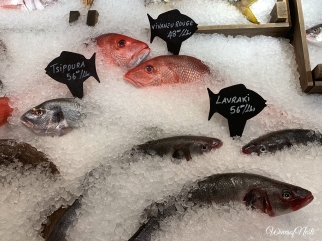 After all these reminiscent flavors, it was finally the time for dessert. Of course, one of our selections was the famous crispy baklava ice cream. It actually has some baklava pieces inside and has the taste of baklava syrup – I really liked this recreation, this actually might be the lightest way to feel the flavor of baklava. The second dessert was the strained yogurt with candied quince pieces, again it was super delicious; light, refreshing, creamy and perfumed. As digestive I had some Metaxa 12 stars, made a great pairing with baklava ice cream.

Atmosphere and the service was great and the lunch menu with some extras made us satisfied and happy. At the end, I have added this experience as another reason why I love Montreal. Here, you can meet people from all around the world occasionally and discover new stories and new flavors every day.